The mysterious boy known simply as Akira is the titular character of the "Akira" universe, both in the manga and anime. He is a child who serves as a key driving force in the lives of the main characters, particularly the psychic Tetsuo Shima.

Akira, unlike in the movie, is figuratively an empty shell of his former self; his psychic powers have increased to the point where it has destroyed his personality. He almost never speaks himself or reacts to external stimuli, making him vulnerable to the manipulations of other characters, who either seek to destroy him or take control of his abilities such as Tetsuo in the manga.

Akira is a young orphan child recruited by the government for their secret parapsychology project and was assigned the subject number 28. The project forced Akira to develop powerful psychic abilities. During this time, he met and befriended other children involved with the project, notably Kiyoko, Masaru, and Takashi (later known collectively as the Espers.)

Akira's powers grew rapidly, eventually beyond his control. On July 16th, 1988, he destroyed the original Tokyo, which the rest of the world mistook for a nuclear detonation. This began a chain of events which quickly led to World War III. Akira was retrieved by the scientists, and was dissected to discover the cause of his sudden psychic growth. The scientists were unable to solve this problem, and the remains were sealed in canisters and cryogenically frozen underground, sealed away as to prevent any chance of problems in the future.

The existence of Akira, and other remnants of the project become a contentious issue within the upper echelons of Japanese politicians. Earth feared Akira because of his almost divine power: he can do literally anything (even create a whole new universe). While the project is considered one of the highest of state secrets, periodic leaks have led to Akira becoming a messianic figure among some cults in Neo-Tokyo. Minister Nezu, seeing this as an opportunity to gain further political power, manipulates a dissident group, known as the Resistance, to free Akira, to further his own ends.

Tetsuo Shima, upon hearing of the existence of Akira, rampages through Neo-Tokyo in a quest to find him in the hopes of learning how to increase his already devastating power. Tetsuo finds and destroys Akira's container, and ultimately discovers the truth. Later, when Tetsuo's powers grow beyond his control, causing his body to swell into a grotesque mass, Akira is summoned by the Espers. He appears not as an ordinary human being, but a spirit-like form that has transcended the limitations of the human body. Akira utilizes the power with which he destroyed Tokyo to absorb Tetsuo, and contain him in a new universe.

Tetsuo's friend Shotaro Kaneda was unwittingly caught in the explosion, and he experiences both Akira, and Tetsuo's memories before being transported back to Neo-Tokyo by the Espers.

Unlike in the adaptation film, where Akira is a supporting character, he is a main character in the manga. Akira was a child test subject, designated number 28, who was part of a secret government parapsychology project where its members tried to research the availability of psychic powers in humans. It went horribly wrong when Akira's powers went out of control and utterly destroyed the original Tokyo in a destructive explosion - out of all the child test subjects who were in the project, only Akira and the Espers survived. While the Espers still lived, albeit in aged states, Akira, who lost his personality as a result of this, was imprisoned in a cryogenic chamber and kept underground to avoid further disaster.

Several years later, Akira was made part of Kiyoko's prophecy that he will destroy Neo-Tokyo due to Tetsuo's involvement. As predicted, Tetsuo, who finds out about him, unearths and releases Akira from his cryogenic imprisonment with the intent of using him, but when Akira is later exposed to Takashi's death from an assassin's bullet meant for him, he is traumatized psychologically and, in his pain, destroys Neo-Tokyo killing millions save for a small group people the remaining Espers saved in their efforts. He is later taken in by Tetsuo and later by the Great Tokyo Empire where he is made Emperor and worshiped as a 'god' by its followers for his "miracles", but in reality his personality made him more of a figurehead.

Akira is later the subject of a failed assassination attempt by a Japanese soldier, George Yamada, and formed a psychic link with Tetsuo, which allowed both boys to not only share thoughts, but also pain. During the climatic battle, Akira is shot by Ryu, a former terrorist, to stop him from destroying Earth with Tetsuo, but ends up "restoring" his former personality. With the help of the Espers and a resurrected Takashi, Akira is able to use his powers to cancel out Tetsuo's explosion and absorb them into his own.

Akira has a variety of psychic powers due to being a test subject for a series of secret government ESP experiments in the 1980s, among them are telekinesis, telepathy, and teleportation. All of them have developed their potential to where they became almost god-like - even a simple act of using them is capable of causing massive destruction on a large scale. Akira, presumably, had lost control over his powers once, in both the film and the manga, destroying the original Tokyo and Neo-Tokyo accidentally. 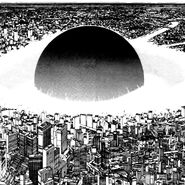 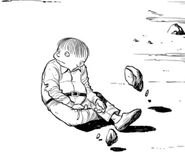 Ralph as Akira from “Bartkira”
Community content is available under CC-BY-SA unless otherwise noted.
Advertisement