Akira Wiki
Register
Don't have an account?
Sign In
Advertisement
in: Manga Only Articles, Female, Manga characters,
and 3 more

Kaori is a young girl first introduced as one of Tetsuo's sex slaves. As the only one who survives, she later becomes an object of his sincere affections.

As a major supporting character, Kaori serves as a way to remind readers that Tetsuo still experiences an ability to form emotional bonds. She also serves as Akira's babysitter, to much of his dismay.

When Kaori is first introduced she is seen wearing ragged, dirty clothes and a scarf. She's implied to be a refugee from the blast, telling by her clothes.

Similar to the anime as that of a shy and timid young girl. She is kind and takes care of anyone who is in need.

Kaori is one of the many survivors of Akira's psychic destruction of Neo-Tokyo. She is first introduced approaching an agent of the Great Tokyo Empire for medicine and food so she can help her ailing father. She is then coerced into joining the Empire as a sex slave for Tetsuo Shima, the real leader of the Empire. Kaori is later shown to be the only survivor when her fellow concubines fatally overdosed from taking Tetsuo's drugs. Her kind and motherly personality earned her the role as Akira's caretaker, as well as Tetsuo's closest friend and confidant.

Kaori is seen doing chores for Akira and Tetsuo around the place like a maid. The main things she does to help is feed, play, and tuck Akira to bed. For Tetsuo she is seen as more of something as emotional support for him. After one of Tetsuo’s rampages, she is told to calm him down by Tetsuo’s Aide, later she then falls asleep next to Tetsuo, but while asleep, Tetsuo goes away from the empire and attempts to kill the Americans in the ship and also Kei, but ends up feeling overwhelmed by his power by the end of the fight. He then attempts to make it back to the sleeping Kaori, but is too weak to make it back to the spot, Kaori then wakes up and is panicked to see Tetsuo face first on the floor.

Kaori overhears plans made by Tetsuo's Aide to overthrow Tetsuo and take over the Great Tokyo Empire. She tries to warn Tetsuo, but she is fatally shot in the back by Kaminari, one of Tetsuo's comrades, in order to prevent her from warning him. Tetsuo learns of this and punishes the conspirators by killing them. He later tries to resurrect her with his psychic powers, but he fails and, out of grief and rage, he goes on a destructive rampage. Kei later finds Kaori's body in Akira's former cryogenic chamber, as Tetsuo had put her there in an attempt to preserve her. 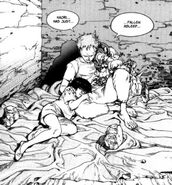 Kaori Getting Embraced by Tetsuo 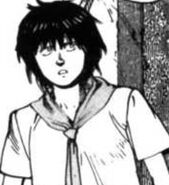 A Deceased Kaori Being Carried by Tetsuo

Kaori’s First Appearance in The Manga

Kaori Talking About Her Father 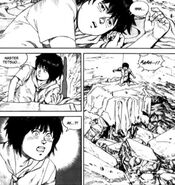 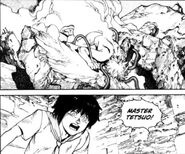 Kaori Finds Tetsuo on The Floor

Samantha Stankey as Kaori from “Bartkira”
Community content is available under CC-BY-SA unless otherwise noted.
Advertisement