Shotaro Kaneda is the deurtagonist and hero of the manga. He is the leader of the Capsules and was a friend of Tetsuo.

Kaneda stands at near average height with short black hair and dark brown eyes. Kaneda wears a wider variety of clothing in the manga, never donning the iconic capsule jacket. In much of the first volume, he is seen wearing a striped pullover with an undershirt, jeans, and slip on shoes. In further volumes he wears a red bodysuit for biking.

Kaneda is portrayed as the main symbol of defiance against traditional forms of authority, particularly Colonel Shikishima. He is known to act before thinking things through, which gets him into trouble.

Beneath his tough and cocky exterior, Kaneda is brave and innately empathetic. He looks out for the safety and well-being of the members of his biker gang (most notably Tetsuo Shima), and becomes vexed to the point of tears when he loses one of them. Kaneda values loyalty and becomes vengeful when trust is broken.

Kaneda is also illustrated using his body to shield those he perceives as vulnerable, placing Akira behind him when confronted by armed guards. He again exhibits this body language while Kei is comatose.

Like most of the characters in the story, Kaneda's early life is largely unknown.

He vows to kill Tetsuo after he begins to change and kills friends of his because of the experiments he has been subjected to. He also meets Kei and becomes her love interest.

He witnesses the changes in Tetsuo and confronts him. He survives the events surrounding Akira and creates with his new friends a new empire. under his leadership and with the support of his dead friends, Neo-Tokyo is rebuilt.

Kaneda With a Crying Tetsuo

A Kei and Kaneda Moment 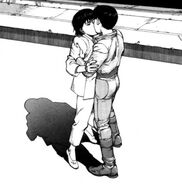 Another Kei and Kaneda Moment...

Kaneda With His Akira Red Motercycle

Kaneda in The Sewers

Bart as Kaneda from “Bartkira”

Community content is available under CC-BY-SA unless otherwise noted.
Advertisement