Shotaro Kaneda's bike is a futuristic, high-tech motorcycle and an iconic feature of the series. As the group's leader, he is entitled to have the most technologically and aesthetically-advanced vehicle.

It is a high-performing red-colored racing motorcycle of unspecified make and model (a badge on it closely resembling that of the BMW logo is visible on its left hand side in the film).

It bears the logos of Canon Inc., the Citizen Watch Co., Shoei Co. and Arai, as well as the roundel for the U.S. Air Force. It has a reverse function, as well as a "ceramic, double-rotor, two-wheel disk drive." The bike is also quoted as having an "Electronically controlled Anti-Lock Brakes" (or ABS) and "200 Horsepower," which both would have been very sophisticated for the 80s. Such specs would still be considered as very high-end for any current-day motorcycle manufacturer. The distinctive sound of the bike was created by splicing recordings of a MiG-21 fighter jet and a 1927 Harley-Davidson motorcycle. Given the visible crank and gearbox case visible on the left hand side of the machine, alongside the distinctive green static electricity visible around the front tire the bike may be presumed to be a Turbine-electric hybrid. 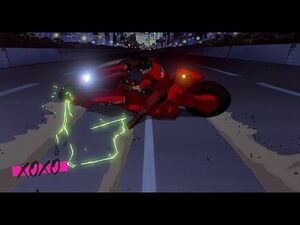 Shotaro's motorcycle in the film, shown from the left side

Shotaro Kaneda and his bike
Community content is available under CC-BY-SA unless otherwise noted.
Advertisement