Tetsuo Shima (島鉄雄 Shima Tetsuo) is both the deuteragonist and main antagonist of the AKIRA franchise. Thematically, he represents the destructive potential of power in the wrong hands.

Tetsuo is a young man of below-average height, and is slightly underweight with a very low muscular body. Similar to many other characters, Tetsuo's hair and eyes are a very dark brown. Originally he had short, lightly-textured hair, but it grew as a result of his acquired powers, nearly reaching his shoulders when not standing up due to radiation.

In the beginning of the film, Tetsuo wears a bulky light blue parka/anorak, similar to what is seen in the manga. In scenes where he rests in the government hospital, he wears a regular patient's gown. After his first escape he wears a white sleeveless shirt with dark blue-gray pants and gray boots. He then dons a worn red cape, ripped from a Resistance flag during the latter half of the film, after breaking out from the hospital a second time.

Tetsuo’s most prominent characteristic is his inferiority complex. Despite Kaneda's efforts to foster a brotherly relationship with him, Tetsuo feels like he is being bossed around and treated as a subordinate. On the surface, Tetsuo has a rather fierce temper, is rather impulsive, and tends to make rash decisions. Like all other members of The Capsules, he has little to no respect towards authority figures. However, it is likely that he chooses to hide insecurity and sensitivity behind this aggression. This can be inferred through the way he is characterized in flashbacks, especially when compared to Kaneda at the same age.

After acquiring the powers of the Espers, and surviving their attempt to kill him, his personality takes a drastic turn for the worse. He storms through Neo Tokyo in order to find Akira, carelessly using his psychic powers to harm the attacking military and civilians alike. After this rampage, he taunts and attacks Kaneda in an effort to boost his own ego. Despite his poor treatment of, and expression of disdain for Kaneda, he becomes genuinely frightened when his body expands beyond his control, knowing full well they were both powerless to stop the mutation.

Not much is known about Tetsuo’s early life. He was apparently surrendered by his mother and brought to an orphanage sometime after Kaneda, as shown in one of the flashback sequences in the film. This is also where the flashback sequence shows Tetsuo's reliance upon Kaneda since childhood.

When he is older, he takes a liking to motorbikes and, alongside Kaneda, joins The Capsules. After a collision with the Esper Takashi, he is transferred to a military institution. Here he begins to develop latent, powerful psychic abilities on the level of Akira, the individual who had engulfed the old Tokyo in a psychic explosion years prior. As these powers expand, they bestow devastatingly destructive abilities, but also cause tremendously painful headaches. The psychic trio, fearing he may cause Akira to awaken, try and fail to kill him, which encourages Tetsuo to instead seek him out. After finding out where Akira is, he leaves the facility and goes on to rampage through the city in search of him. The military, led by Colonel Shikishima, attempts in vain to stop him, fearing the threat of another Akira-sized disaster.

Upon finding the remains of Akira under Neo Tokyo's Olympic Stadium, he starts to lose control of himself and his abilities while confronted by the military, the Espers, and Kaneda. Here, he finally loses all control of his psychic abilities and becomes a mutated mass of flesh. Akira, called by the Espers, reawakens and draws Tetsuo into an alternate dimension.

Tetsuo’s fate is not elaborated upon by the end of the film. However, it is assumed that he transcended into a new universe alongside the Espers, of which he may have creative control. Tetsuo's voice can be heard at the end of the film, saying "Boku wa... Tetsuo" ("I am Tetsuo", in English). "Boku" is a form of "I" that implies humble, soft masculinity, and, from confronting the Espers and Kaneda up until that point, Tetsuo has elected to use "ore", a hard, tough-guy masculine form of "I", instead. The change back to "boku" in the original Japanese signifies that Tetsuo has cast aside his aggression and re-acquired a sense of humility in the face of this new universe. In English, the line may simply indicate that he is now a God of this plane of existence, which he has begun to shape. 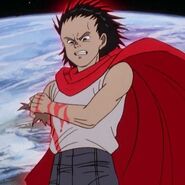 Tetsuo with his mutated arm
Community content is available under CC-BY-SA unless otherwise noted.
Advertisement